On Saturday, November 18th, there will be many reasons to celebrate - this weekend will be both - full of sports activities and celebrations. During the day Riga rogaining will take place next to the shopping mall "Spice Home" , but in the evening many will celebrate anniversary of Independence day of Latvia, enjoy fireworks and  other activities with friends or family provided in Riga. Remember that only until Sunday, November 12th (including Sunday), it is possible to register for Riga rogaining for cheaper participation fee, as well as register children for free.

Already everyone has a possibility to see race map (without checkpoints). The maps will be double-laminated and waterproof, but each participant will be responsible for maintaining the map in humid conditions. The total number of control points is 50, the total value points are 200 points. Checkpoint values ​​will be from 2 to 6 points (the value of a point is the first digit of its' number). The map scale is 1:20 000 or 1 centimeter on the map is equal to 200 meters in real; map size: 62 x 42 cm. The map is prepared based on the topographical materials of the "Jana Sēta", corrections in map by Reinis Bērziņš and Valters Kaminskis. To view the race map, click here or on the image below to enlarge it!

Riga rogaining will bring every participant to its' most beautiful, scary and interesting places hidden in Riga that we all go by without noticing. Did you ever think about the marsh behind the fence of Riga airport runway and how tasty the cranberries are that cranes and other birds enjoy? Or, when driving along the Jurmala highway, have you asked yourself, what are the two worlds, that are connected by these countless pedestrian bridges overhead?

The map will be easy to understand for both - experienced rogainers and beginners. The city map is based on "Jana Sēta" material, where the forest is green, but the open areas are white. There are additions and corrections made, but it should be remembered, that rogaining maps are not drawn as precisely as orientation maps, so during the distance you should follow the main objects on the map. The most important crossings across major streets, highways, railways and ditches (pedestrian crossings, bridges, tunnels, beaver dams, broken trees) are highlighted on the map. If you choose to cross the highway in other places, it  may take up to 20 minutes until a gap in the car's flow appears.

Attention must be paid to the fences, which, as predicted, will be everywhere. The map carefully lists those fences that will definitely be in the way from one point to the next checkpoint, but if you love alternative routes, then you may come accross the fences that are not in the map, but it can be easily guessed - multi-storey houses, living areas or public buildings are usually publicly available and will be without fences, but private house areas and industrial areas are usually fenced and inaccessible. If the fence is marked with gate open, it means that it is allowed to go there, and some checkpoints will intentionally be placed in fenced areas, because the owners of the area have allowed to go there.

On the map there are ditches that can easily be crossed staying dry, but there will also be those that can only be crossed by swimming ("not passable"), so these ditches are marked with crossing places on the estimated rogaining routes. The ditches have not been fully tested over the entire length, so those who love alternative routes may come accross unmarked trees over the ditch (a gift from beavers), but using marked crossing places is recommended. There is water in all the ditches, while the dry ditches are not drawn on the map at all. As the weather forecast delights with dry weather  in the coming week, and the snow is not coming either, it's likely that the dry ditches will remain dry.

As in the city, many of the territories belong to private owners and should be considered a prohibited site in classical orienteering, but they are not marked on the map, saving the printer's red color. The control points are located in places where such territories would not be advantageous to cross. On the other hand, in the case of alternative routes, they can be guessed on the map in the same way as fences - if you see the sign "No entry - forbidden" - do not ignore it and do not try outrun guard dogs! Almost all control points can be reached with dry feet, sometimes with small mud. Of course, proper rogaining should not be made without mud, so there are a couple of checkpoints on the far end of the map, where the fastest path will not be the driest. What will be your Riga rogaining strategy? 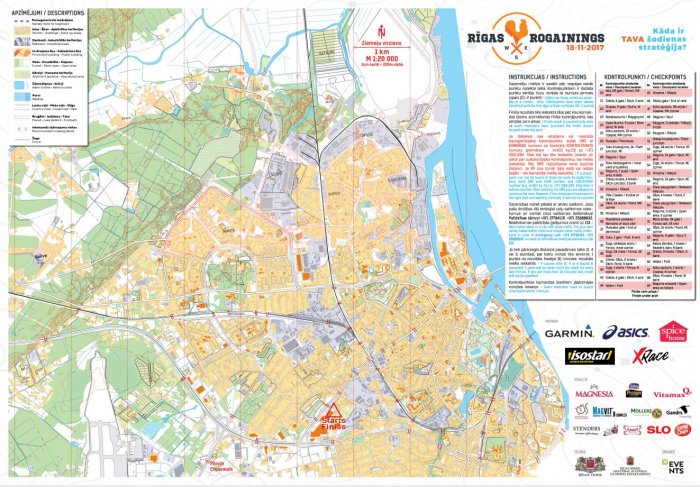